BOZEMAN – Montana State University is now home to a working wind turbine, thanks to a crew of students, faculty, staff and volunteers who hoisted the 50-foot-tall tower into place.

The turbine stands in a field just off Fifth Avenue on the southeast side of MSU. The crew worked through snow and cold weather for three days to install the turbine, said Robb Larson, who heads MSU's Wind Applications Center and was in charge of the installation. 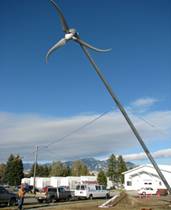 "This site, although not the greatest wind resource, is the best possible location for the turbine," Larson said, pointing at the engineering buildings only two blocks away. With the turbine so close by, students will be able visit and conduct research at the site, he said.

The turbine is part of the Montana Wind for Schools program, which will install four similar turbines at schools in Cascade, Fairfield, Livingston and Stanford in the coming weeks. Students will use the turbines in lessons about alternative energy.

The MSU turbine and its four siblings were funded by about $60,000 in grants from Northwestern Energy and the Montana Department of Environmental Quality.

The turbines are meant to get people in rural towns and at MSU talking and learning about wind energy, said Sean Micken, project coordinator for Western Community Energy, the company contracted to install the Wind for Schools turbines in Montana. "It's extremely important to engage young people and rural communities in discussions about energy because those are the people who will really be impacted by wind development," Micken said.

The Department of Energy (DOE) expects wind to provide 20 percent of the country's electricity by 2030. The department estimates that, between now and then, Montana's wind industry could increase its capacity from 166 to 10,000 megawatts – enough to power about 2.5 million homes. DOE chose MSU to be the home of Montana's new Wind Applications Center, which helps teach the public about wind energy and brings wind topics into engineering classes for MSU students.

Cole Young, a senior majoring in mechanical engineering technology, helped install the turbine on Monday. The Ekalaka, Mont., native is already enrolled in Larson's alternative energy class and said the turbine will also be the focus of his capstone project: a system to monitor the weather at the turbine site and make that information available to the public via the Internet.

The turbine stands as tall as a light pole. Its 12-foot diameter blades operate at 45 decibels –about as loud as someone whispering. In all, the turbine will produce 1.9 kilowatts, "enough to run a hair dryer, toaster and microwave, but not at the same time... and on a windy day," Larson said.

Larson knows that the turbine will not put much of a dent in the university's power bill – some buildings use light bulbs that need 500 watts, a third of what the turbine can generate – but he hopes that the machine will get more people talking about wind and other alternate energy sources. Micken agreed that getting people to see that wind power is a real, working option is the most important step right now. "It's not some futuristic dream," Micken said. "It's magnets and copper, not rocket science."

« Back to Wind Projects Page